The State of Television in 2019

Its now mid November and I have had time to watch all the new shows I wanted to check out and decide which ones I liked and which ones were duds.
Where is what I posted before the season began along with what my rating is now after two months.

• Bless the Harts (I gave it a 2) (Final rating still a 2)
This one was ok, but there was no reason to tune into another episode, and I don't watch any of the other Sunday night Fox animation (not even Simpsons, which is pretty good) so I can't even leave the TV on by accident and see this one.

• Bob Hearts Abishola (I gave it 1) (Final rating, 1.5)
This one is OK, but it really is a bottom tear sitcom. I can't see it making it to a second season, and I won't be watching it during the first season.

• Carol's Second Act (I gave it a 4) (Final rating is a 3)
This one is better than Bob Hearts Abishola, but just a little. Again, there were so many better sitcoms cancelled last season that this.

• Sunnyside (I gave it a 2) (Final rating has to be a 0 as I don't remember it)
I had totally forgotten about this one until I reread my post. Now I kinda remember watching the first episode and deciding I was not going to continue with it. And it looks like that may have been what everybody else did, because I don't remember seeing it on over the last few weeks.

• Nancy Drew (I gave it a 3) (Final rating is a 5)
This show I really like, and it has now become a favourite of my son, so we watch it together. The only thing I don't like it what it has too much of a supernatural vibe to it. I would prefer the show if it was just regular mysteries. That said, I still think its a really fun show.

• Emergence (Didn't rate this one) (Final rating 4)
Here is a show that I didn't even pay attention to when I saw the full page description in TV Weeks Preview issue. I thought it was just another cop show which I don't watch. I saw an add on TV for it and decided it looked interesting. This one is actually a sci-fi show and so far its been pretty good.

• The Unicorn (Didn't rate this one) (Final rating 4.5)
This is another one that I did't pay attention to from its full page description. But it turns out its by far my favourite new sitcom of the season. The only problem is that it might be hard to do a second season, as they really play off the fact he is really new at the dating scene, and after a year, it might seem like they need to find a new angle for the show. But I really like the characters and I look forward to it each week.

And here is a look at the shows that didn't make it from last season, as long as the ones that were renewed for a second season. 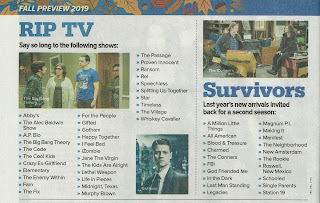 From the RIP list, I am going to miss:
Abby's - Funny show
A.P. Bio - Really funny show
Crazy Ex-Girlfriend - Lots of fun, even if you had to fast forward through some of the songs
Elementary - The only cop type show I was watching
The Kids are Alright - Really, really funny show
Speechless - Was a great show, but the final season was not the best
Splitting Up Together - This one was also really good first season, but not as good in the final season

From the shows that were renewed from last season, I was glad to see these shows back:
God Friended Me - My son and I watch this together
Single Parents - This is currently my favourite sitcom

TV is really not what it once was. Back in the 80's and 90's I can remember being so excited for the new fall season of TV shows and so was everyone else. We were all watching the same shows. Now, I have cable and I feel like I have the most choices, but even so, when I look at the TV Week listings I see so many shows that I don't have access to on Netflix, Hulu, Amazon, etc. The Fall TV Season is just not as exciting as it once was. Its way to fractured now and I just see it getting worse as time go on and we get even more splintered into smaller and smaller ecosystems Honestly, I can't believe they still feel TW Week magazine. I buy the Fall Preview issue every year along with the returning Series issue, but other than the pages in the front and back of the issue that list the new shows, the rest of the magazine which is television listings is a huge waste of paper, as I can easily see the guide right on my TV. I do remember the days when along with TV Guide and TV Week, there was a TV listings magazine included in the weekend newspaper, and a free TV listings magazine full of ads you could pickup at the grocery store or a hundred other places. I really do wonder who is still buying TV Week magazine for the show listings? That said, I can't wait for next year so I can pick up the new issues of the Fall Preview and Returning Shows issues!
Posted by Ronn Roxx at 4:34 PM